The past few weeks have been  busy y’all. I’m currently on Spring Break, so like a child, I am out of school! It’s awesome! I’m not even gonna try to lie to make you feel better about your crappy non-spring breaky job. Be a school nurse, yo. Or spend spring break at work. It’s your choice, people.

This past weekend, we were grateful to go to my hometown and celebrate Easter with most of my family. My brother Caleb, his wife Lakon, and their 3 rambunctious sons joined Ben, Darcy, Clark and I at our parents house. My sister Anna and her three children already live in my hometown, so it was a full and fun weekend. On Good Friday, my niece Mary Mac had her birthday party at a skating rink that I’ve been going to since the early 90s. It was awesome because nothing has changed. Seriously. Not the paint colors, not the sound system, not even the smell. All of the kids had these walkers to help them skate. It was hysterical! They looked like tiny uncoordinated old people skating around with walkers. Even the babies like Darcy had fun. There were these little foot-propelled riding scooters, and the 2-year olds loved them. They actually made it look like too much fun, so naturally I had to try one out. I sat down on the scooter. My butt was approximately 2 inches off the ground which placed my knees right next to my ears–that’s how low to the ground the scooter was. I immediately decided I needed to race Lakon. Around the rink we went as fast as our little scrunched up legs could putter. Oh Mylanta. My calves! My loins! How they burned! I totally killed her though, I was so fast. So then Caleb decides he also wants to race, and Lakon told him to hurry up because I was tired, and he could beat me. She was right, man. My legs were done, and he absolutely destroyed me. Keep in mind this was happening all while Darcy was chasing after me, weeping,”It MY!” because I had stolen “her” scooter. Whatever, kid. 🙄 You own exactly nothing in this world.

That night we played 13-sol (a family card game) and drank wine and whiskey drinks. We made stupid jokes at each others’ expense and laughed a lot because we are hilarious. My brother is leaving soon, and it breaks my heart to have him far from me. Caleb is my best friend even though he cheats at cards, screams like a girl, and uses unfair advantages in baby-scooter racing. I love his guts, that jerk.

We were able to go to my hometown church’s Easter egg hunt on Saturday. It was fun, and Darcy was a beast at hunting eggs. My siblings and I always kinda sucked, but apparently my Jewish husband would do very well at his neighborhood egg hunt as a child 🤔 So, I guess she gets it from her dad!  We went to my church on Easter Sunday, and it was good for my heart to see so many faithful members who have prayed for my family and my precious baby. My family took up an entire pew!

Clark Elliott has gotten his helmet.

If you follow me on the Facebook or Instagram, you have already seen that the helmet has only enhanced his devilishly handsome looks. He wears the helmet 23 hours a day and will likely wear it for the better part of a year. In the spirit of complete honesty, I hate that helmet with the fire of a thousand suns. I know, I just said it was cute, but I actually hate it. I want to press my face against his sweet cheeks and I only get to do that for one hour each day. The other 23 hours, my cheek rests against hard plastic. I know, I know. I should be grateful, but I think it sucks, and I hate the helmet. So there. Moving on…

Clark is just so, so sweet, and he has made SO much progress with physical therapy! His doctor said that he can’t believe that Clark is even the same baby as when he was born. I’d like to say it’s because I work so hard with him, but it’s all God. He has been working miracles y’all…and yet, I still doubt. For the first time ever, I really understand the Israelites. They saw Moses part the Red Sea, and they were delivered from Pharaoh! Even after that miracle, they doubted the Lord and built and worshipped idols shortly after leaving Egypt. The apostles saw Jesus raise the dead, heal the blind and lame, and yet they still doubted that he would return as he promised. I always scoffed at their disbelief. Now? I get it, man. You see, this past week, Clark’s awesome physical therapist noticed Clark was making some odd eye movements and notified our neurologist. Our neurologist wanted to see us, and she ordered an EEG to determine if Clark could be suffering from seizures. His EEG was normal 🙌🏼 which doesn’t completely rule out seizures, but it does make them less likely especially as no other symptoms have been noticed. Y’all I got so upset when his PT initially told me her concerns. I just felt so defeated. Like, “What is this NOW?!! Could I get a damn break, please? I mean, throw me a freaking bone” My beautiful husband was like, “Chill. We’ve been here before, he’s gonna be fine.” But I? I struggled. I, who have seen my son healed so much, still doubt that God plans goodness for baby Clark. One little setback–hell, potential setback and that negative thought manages to grow an entire forest of doubt in my mind. This total Eeyore-attitude then effectively wipes away my appreciation for all the good things that have happened and in turn magnifies my fears of what’s to come. It’s ridiculous and ugly and sinful. I’m working on it. Still could use a break from scary stuff, though.

Darcy goes to a Jewish daycare, and now she covers her eyes when she sees candles because she thinks they are Shabbat candles. It’s pretty cute. She covered her eyes for her birthday cake 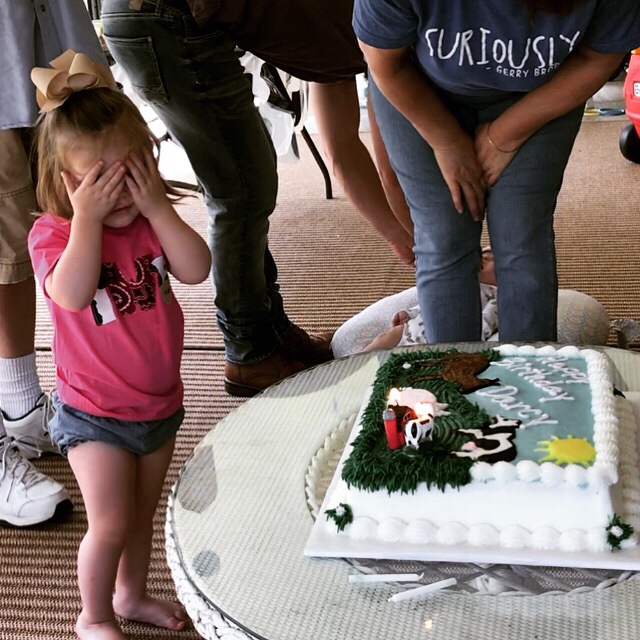 She also sings a song called “God is everywhere,” at daycare. So now she points to the sky and says, “God…is over there!” She’s listening and putting things together, y’all. Which makes the whole interfaith thing complicated. Not in a bad way…just a complicated way. She is both Jewish and not. And I’m thankful for it. She is special and our family is pretty damn cool. One of the greatest things about it is that it keeps Ben and I on our toes praying for guidance and reading. It’s interesting, but I’d rather it be our way than any other.

It is no coincidence that all of these happenings coincide with a renewed sense of purpose for me. God is leading me to explore the Scriptures in new ways. I’m not sure where it will lead, but I am hopeful and excited in a way I cannot remember having been before. I’ll keep you updated on that.

So that pretty much concludes this session of word vomit where you learn entirely too much about my family and our going-ons. If you’re still hanging in there, I’m glad you are along for the ride. Love to all ❤